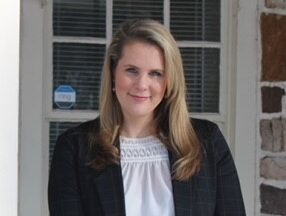 People say: Your door’s too open, you listen too much.

Her reply: ‘I don’t know how to be any other way.’

Editor’s note: A Knightly News reporter and photographer recently shadowed President Linda Fedrizzi-Williams on the job for a couple of hours over four days. To say Fedrizzi-Williams is busy is an understatement. Even so, as our story shows, she’s accessible. We thank the president (who is also our publisher) for her kindness in allowing our reporter and photographer such frank access.

Many college presidents seem elusive to students, a familiar face and name from newsletters and emails, but no one they see regularly, let alone with whom they feel a solid connection.

Not at Central Penn.

Dr. Linda Fedrizzi-Williams makes it clear that being accessible and involved in her community is a significant part of what brings success to the college.

Fedrizzi-Williams became president of the college in June 2018 after serving as vice president of academic affairs and interim co-president since 2016.

After I shadowed her for a few hours over four days in a row recently, her dedication to serving other people was apparent to me. This story reveals what I learned.

Day One: President’s Commission on Diversity and Inclusion

One aspect of college Fedrizzi-Williams puts much emphasis on enhancing is the student experience. Last June, after the Black Lives Matter protests following the death of George Floyd while being arrested by Minneapolis police in the previous month, Fedrizzi-Williams formed a taskforce called the President’s Commission on Diversity and Inclusion. Its purpose is to find actions the college can take to make the campus and surrounding community less discriminatory, to find common ground and differences in individuals, and to celebrate them.

Commission members come from a multitude of backgrounds at the college, and the community, giving the group a well-rounded view of activity on campus. The first meeting of the commission, held over Zoom, was broken into three groups. Each one got the chance to meet individually for some time before reconvening.

Much of the conversation that followed surrounded a diversity climate survey for faculty and staff that Group A had been working on, which is to be launched later this year. One commission member said the group’s research showed that as of Sept. 25 last year, about 60 percent of Central Penn on-campus residential students are what have been traditionally described as minorities – not white.

“We are working toward diversity,” Fedrizzi-Williams said, “but it’s difficult, considering that only 30 percent of our student body is nonwhite.”

That’s because, with Central Penn having an especially robust high school travel program between 2005 and 2012, and no application fee, many students from Philadelphia and other cities with large nonwhite populations signed up for and were accepted to the college, which contributed to the growing minority percentage of the residential student body. Beginning in 2012, however, the number of high school recruiters working at the college dropped, and recruiters’ focus turned to adults seeking higher education. When asked whether this is something she wishes the student increase of 2005 – 2012 would return, Fedrizzi-Williams replied that when those students applied to Central Penn, they had few expectations, but when they were accepted, they had the opportunity to realize their potential. Fedrizzi-Williams said that, ultimately, finding creative ways to engage people is the best way to find prospective students who would have otherwise never reached out. Last year, for example, the college hired two new high school recruiters, but COVID-19 required them to do their job primarily over the internet.

Group B spoke about the employee-onboarding process and making sure that prospective employees get the sense that Central Penn is a welcoming environment for employees of color. Providing provocative programming, such as the Civil Rights Era-set poem play “Reclaiming My Time,” by former faculty member Maria Thiaw, and reaching out to The Young Professionals of Harrisburg, were some of the ideas that came out of this discussion. A member of Group B brought up that some candidates are apprehensive about moving into or around Harrisburg, for one reason or another. Megan Peterson, dean of equity & multicultural affairs, mentioned that the school has “Central Penn-isms” that aren’t monitored because they are not rooted in writing. Fedrizzi-Williams and Romeo Azondekon, vice president of student services, agreed that corporate culture can be a quick turn-off for incoming employees.

This is not an effort for our school alone, though. Fedrizzi-Williams and her commission worked with Dr. Warren Anderson, then vice president of inclusion and diversity, chief diversity officer and Title IX coordinator at Harrisburg Area Community College (HACC), and now vice chancellor for equity, diversity and inclusion, and student affairs, at the University of Wisconsin. Fedrizzi-Williams and Azondekon are good friends with Anderson, and they work together to find new ways to diversify the Central Penn campus, and to make people feel included.

“Things like these are tough to discuss,” Fedrizzi-Williams said. “We are holding up a mirror and saying, ‘You’re leaving out a large amount of our students.’”

The moment after walking into the meeting room, it was clear to me that this is where the big decisions are made.

I could almost feel the power, the decision-making prowess, that exuded from cabinet members. Much of what was discussed during this meeting was confidential, and The Knightly News is honoring that confidentiality. The members of the cabinet are some of the most experienced in their departments. When asked what credentials someone must have to be involved in these meetings, Fedrizzi-Williams replied that they should be optimistic, detail-oriented and have expertise. She looks for individuals who have backgrounds that are different – varied – from her own, and that add new perspectives to issues some administrators otherwise might see as unsolvable.

The first issue the group discussed was COVID-19. Cabinet members were concerned about the potential rise in cases caused by family gatherings and travel during the year-end holiday season, and discussed procedures Central Penn personnel and students followed during Thanksgiving and winter break. However, making choices such as implementing a remote learning period isn’t as simple as saying “Yea” or “Nay”; instead, the cabinet considered that requiring online learning could disrupt learning.

The cabinet decided that a two-week all-online instruction period for students after Thanksgiving, and all-online instruction, with faculty also at home, from Christmas through two weeks of the winter term – which began on Jan. 5 – would provide protection for everyone against people who traveled to visit family and may have been exposed to the SARS-CoV-2 virus, which causes COVID-19 infection or disease.

Rapid testing and quarantining were among some of the topics of conversation, and the option of mobile units for testing when necessary was raised. As the nation turned over into a new national presidency, the cabinet also waited to hear of any nationally implemented guidelines that must be followed.

Not only had the cabinet discussed the potential for a disturbance in a student’s education, but Fedrizzi-Williams made it clear that she’s aware of student struggles. She made note of the desire for privacy, the need for a printer and a computer, nutritional needs, educational needs and more.

“We need to do what makes the most sense for us,” Fedrizzi-Williams said.

Weekly or biweekly, Fedrizzi-Williams meets one-on-one with each person who reports directly to her.

Krista Wolfe, vice president of academic affairs and provost, sat with her – safely – to discuss changes that will relieve some student concerns.  Wolfe had a step-by-step guide for assessing people’s experiences, and after surveying the student population’s needs, new employee positions were formed to better address those needs.

Their conversation was short because they had seen each other for three days in a row, but one thing was apparent by just watching the two interact – their connection. Conversations about gender equity in the workplace, for instance, came up organically, and not because the topic was a bullet point on a list. There was banter that, mingled with their business discussion, showed that while they take their jobs seriously, keeping a friendly relationship, and a positive outlook, can create and facilitate open discussions.

On the last day of shadowing Fedrizzi-Williams, I asked her a few questions that had been burning in my mind.

What is your life like outside of the college?

She wakes up early in the morning, gets dressed, prepares lunch for herself and her children, exercises, comes to the school, goes home, has diner with her family and does it all over again.

Her favorite part of the day is dinnertime, where her sons — she calls them the lights of her life — ask her questions about her day. Some nights, she comes home so late from work that she can’t tuck her sons into bed.

That’s some nights, but Fedrizzi-Williams holds herself to a high standard, by choice, and with empathy, explain that “I would never make an employee choose between family and work.”

She made note that she has nearly no time for herself.

What is your five-year plan for the college?

As soon as I finished the question, Fedrizzi-Williams answered: “Staying safe!”

Health remains number one on the Central Penn administration’s priority list, but beyond the pandemic, Fedrizzi-Williams’ focus fell in line with bettering the student experience, as it always has.

(Ladder programming means acquiring education in ascending order of certifications or degrees, such as earning a certificate in a particular subject, and then an associate degree, and then a bachelor’s degree.)

Another part of her plan is changing Central Penn from being a for-profit college into a nonprofit institution – something she recently told Central Penn employees could very well occur soon.

These ambitious steps are what cause Fedrizzi-Williams to consider herself a calculated risk-taker.

“If you want the reward, you have to be willing to take the risk,” she said. “There’s very little you can’t accomplish.”

What approach do you take to teamwork and culture at Central Penn?

This school is undeniably fast-paced, but Fedrizzi-Williams is working to slow things down so students don’t become overwhelmed. Giving people the chance to grow and climb is in her job description, and that doesn’t apply only to students. Recognizing people for their accomplishments, speaking honestly about concerns and helping people feel as though they are a part of a community are what contribute to the positive environment she attempts to create.

When it comes to teamwork, Fedrizzi-Williams is vocal about preferring small work groups. Creating task forces and leadership teams that work collaboratively has proven to be more efficient in big projects. She’s noticed that people are more comfortable and willing to speak when among a group of supportive peers or coworkers.

How do you handle transparency?

She defined transparency as critical to an institution being trusted. Without communicating openly to the public, suspicions arise. The key to staying respected is to explain the rationale behind the decisions that are made, and not to hide behind them.

How are you able to stay light-hearted in tough situations?

“I don’t dwell on things, especially negative; I dwell on what I can control,” Fedrizzi-Williams said.

She feels she can find a silver lining in any situation.

“My life’s mission is to improve other people’s lives,” she said.

After spending only a handful of hours with Fedrizzi-Williams, I can safely say that pride is too simple a word to describe how she feels about her work. Cornerstones of her work style include outreach, deliberation and communication. To manage a life with so many people who need you while you’re running at 100 percent must be tiring, but with support from her colleagues, and thanks to her strong will and optimistic outlook, nothing stands in the way of her creating positive impacts.

“Some people say I have my door too open or I listen too much,” Fedrizzi-Williams said. “I don’t know how to be any other way.”

Shughart is club photographer and a reporter for the club. 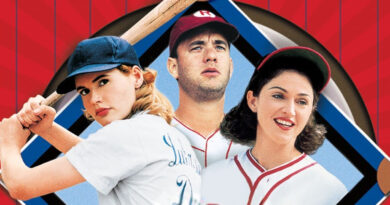 CPC Film Series presents ‘A League of Their Own’ 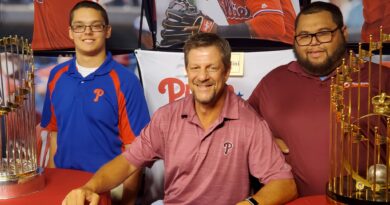 Thanks for the memories!