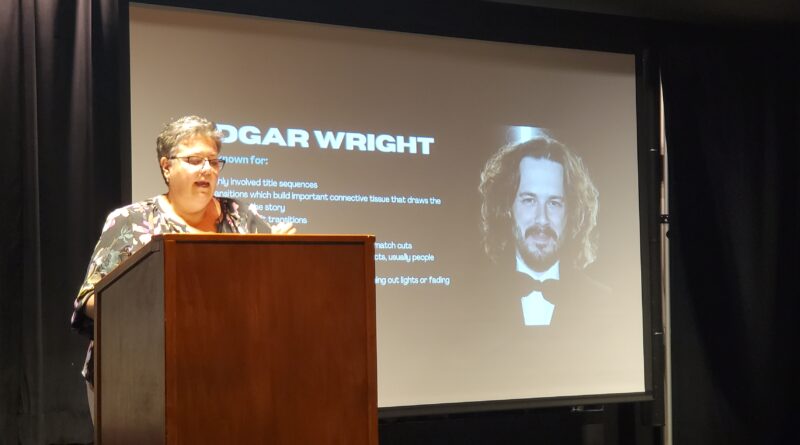 Corporate communications student Leslie Heimbaugh dazzled an audience of about 30 people on July 30 with her knowledge of movies and media theory in the latest offering of the CPC Film Series in the Capital BlueCross Theatre.

Surrounded by her family, friends, faculty, staff and students, Heimbaugh, co-president of The Knightly News Media Club and film series correspondent for The Knightly News, presented the 2010 film “Scott Pilgrim vs. the World” as part of the quarterly series.

Heimbaugh enlightened the audience on several vital aspects of ”Pilgrim,” including media scholar Henry Jenkins’ theory of transmedia storytelling, a discussion of writer-director Edgar Wright as an auteur and why, as Heimbaugh claimed, she shouldn’t like the film as much as she does.

The event, sponsored by Gamma Beta Phi, the college’s honor society, was a hit with attendees. Gamma Beta Phi members helped sell concessions during the event. The club donated all proceeds, about $100, to the “Raise the Roof” philanthropic initiative that the Central Penn College community is engaging with through the remainder of the year.

The CPC Gaming Club was also involved in the event, providing two gaming consoles and retro video games for attendees to play. Preceding the presentation, audience members played games such as Pac-Man, Street Fighter 2, Space Invaders, Frogger and other classics.

History of the CPC Film Series

The series has become a quarterly tradition at the college, with 14 films presented by nine presenters since its inception in January 2018.

The film series was created so faculty members could provide an intellectual discussion on films presented so audience members perceive classic films differently, understand the historical impact the films have had or have a better understanding of film in general.

The CPC Film Series started as the Humanities Film Series, with faculty of the School of Humanities and Sciences championing it. In 2020, the committee responsible for putting on the event decided to rebrand it as the Central Penn College (CPC) Film Series, allowing a broader, more diverse group of presenters for the films.

Starting that year, students got more involved with the film series, as each event had a student club sponsor the event and the opportunity to share more about their organization with the audience. The Knightly News Media Club, the Black Student Union and the Legal Studies Society are among the clubs that have sponsored film-series events over the last two years.

Heimbaugh has been involved in the CPC Film Series since she arrived on campus in the fall of 2018. Starting with the screening of “Airplane,” presented by Professor Thomas Davis, Heimbaugh has covered films and lectures on them in feature stories for The Knightly News.

Since then, Heimbaugh has written 10 feature pieces, and these articles are typically some of the most highly regarded and generate the highest traffic of any of the articles written each quarter by club reporters.

In fact, Heimbaugh took home a statewide journalism award for one such article, with an honorable mention in the 2020 Student Keystone Press Awards for her story “Potter responsible for millennial empathy, Rovan says,” about former Central Penn Professor Marcie Rovan’s presentation of “Harry Potter and the Order of the Phoenix,” in July 2019.

This is the only such award the Knightly News Media Club has been awarded in its six-year history.

Because of her avid involvement with the CPC Film Series, the committee that determines movies and presenters opted to have Heimbaugh present in October 2020 Jordan Peele’s 2017 Oscar-winning film “Get Out.”

Unfortunately, Heimbaugh got COVID-19 the week of the event.

Audience members would have understood if she bowed out of the presentation due to her illness, but Heimbaugh would have none of it. Even though she couldn’t present in person, she put together a recorded presentation that was shown to the audience and that encapsulated her perspective of the film through the lens of critical race theory.

As successful as “Get Out” was as part of the quarterly film series, Heimbaugh was bothered that she couldn’t present in person. As planning began for the 2021 film series rotation, it was clear she would be given another opportunity to present. She selected “Scott Pilgrim vs. the World” as the work of choice, and the rest is history.

But what is it about movies that Heimbaugh gravitates to?

“I’m always looking for a chance to geek out on films,” she said on a recent Knightly News Podcast. “You can really find a lot of common links between people through film and it provides us with a way to disengage from the world for a little while.”

What stands out about Heimbaugh is her genuine passion for film. While this film received mixed reviews from critics, Heimbaugh shared with the audience the redeeming qualities of a film generally viewed as a box-office flop. She discussed several essential components of the film in her presentation, specifically looking at the concept of transmedia storytelling, the auteur theory and visual onomatopoeia.

As part of her 30-minute presentation, Heimbaugh discussed Henry Jenkins, a well-known media-studies scholar, and his theory of transmedia storytelling.

Jenkins posits that modern-day filmmaking often includes a variety of channels to tell a story, be it accompanying comic books, podcasts, fan art and the like, as a way for the media production to spread across different media.

Heimbaugh showed how the film began as a comic book and was adapted to the screen and had a video game that accompanied the film’s release. True fans of the work would be drawn to all of the different platforms of distribution.

In Jenkins’ 2006 text “Convergence Culture,” he developed theories surrounding the new age of media distribution. While many modern media scholars opine that the Internet has caused havoc in communication because of social echo chambers and the high concentration of Internet media companies, Jenkins takes a much different perspective, focusing on the positive contributions of the Internet.

He spends a great deal of time in the text discussing the new participatory culture of fan communities surrounding key media franchises such as “Star Wars” and “Harry Potter,” and analyzes how these franchises produce paratexts to accompany the main work.

Heimbaugh, using Jenkins’ theories, walked the audience through these paratexts to illustrate the concept of transmedia storytelling with “Scott Pilgrim vs. the World,” while also sharing other relevant examples of the concept in more popular texts.

Wright as an auteur

Another element of her presentation focused on director Edgar Wright as an auteur filmmaker. The auteur theory, originating in the French publication “Cahiers du Cinema,” was first used by French film critic and theorist Andre Bazin in the early 1950s.

“Cahiers du Cinema” (“Notebooks on Cinema” in French), one of the most respected film-criticism publications, highlighted the style of well-known French filmmakers such as Jean-Luc Godard and Francois Truffaut, both important in the development of New Wave filmmaking, and very influential on filmmakers. The purpose of this delineation stemmed from the difference between these French filmmakers and what was going on in American cinema, as the studio system in the United States did little to substantiate directors of the time.

Since then, the auteur theory has been used as a term to describe a director’s style as a way to have a final imprint on a film. Directors such as Martin Scorsese, the Coen Brothers, Quentin Tarantino, Christopher Nolan and Spike Lee have been revered as auteurs: If you are watching one of these directors’ films, specific signatures are used, and you know a particular film was made by one of these auteurs because of those signatures.

Heimbaugh made the case that Wright should also be considered an auteur, pointing to examples from “Scott Pilgrim” and similarities to other films Wright has directed, including “Baby Driver” and “Shawn of the Dead.” These similarities to other Wright films lead to the notion that his visual signature is crucial to this film’s success.

What made this film series presentation unique is that it was held during Heimbaugh’s final term before graduation, as she is enrolled in her final coursework in this summer 2021 term. But what she has done as a journalist, and now as a presenter, will forever leave her legacy on the CPC Film Series, the Knightly News and the college community.

Heimbaugh has hinted at continuing to be part of the CPC Film Series in the future, as she genuinely enjoys her opportunity to “geek out on film” as part of her involvement with the media club.

She also intends to continue recording her podcast, “Knights at the Movies,” for the foreseeable future.

Diverse communities are weaved in layers